A site in Oak Ridge, Tennessee has been selected as the site for the USA’s first commercial high-assay low-enriched uranium (HALEU)-based fuel fabrication facility. Construction of the TRISO-X Fuel Fabrication Facility, or TF3, is to begin this year, with commissioning and start-up as soon as 2025.

Xe-100 developer X-energy announced on 4 April that its wholly-owned subsidiary, TRISO-X LLC, has selected the Horizon Center Industrial Park in Oak Ridge to site the plant, which will initially produce 8 tonnes of fuel per year – enough to support about twelve Xe-100 small modular reactors.

The commercial facility’s cross-cutting design will enable manufacturing of fuel for any number of advanced or small nuclear reactors based on TRISO fuel, the company said.

TRISO – tristructural isotropic – fuel particles consist of a “kernel” of uranium oxycarbide (or uranium dioxide), surrounded by layers of carbon and silicon carbide, giving a containment for fission products which is stable up to very high temperatures. Fuel for X-energy’s Xe-100 high temperature gas-cooled modular reactor consists of spherical “pebbles” each embedded with 18,000 TRISO particles. Each fuel pebble is about the size of a billiard ball – around 6cm in diameter.

TF3 will be a first-of-a-kind US Nuclear Regulatory Commission (NRC) Category II-licensed TRISO-based fuel fabrication facility, X-energy said. It will utilise uranium enriched to less than 20% uranium-235 to manufacture nuclear fuel products for a variety of advanced and small modular reactors, plus speciality fuels for space nuclear projects. TRISO-X aims to expand the facility’s capacity from its initial 8 tonnes per year to 16 tonnes year by the early 2030s.

In October 2020, the US Department of Energy selected X-energy as one of two recipients to receive funding under its Advanced Reactor Demonstration Program (ARDP) to build a demonstration plant that can be operational within seven years. Under the project, X-energy is to deliver a commercial four-unit power plant based on the Xe-100, as well as a commercial-scale TRISO fuel fabrication facility. In April 2021, Energy Northwest, Grant County Public Utility District and X-energy formed the Tri-Energy Partnership to construct a plant based on the Xe-100 design at Energy Northwest’s existing Columbia nuclear site in Washington state.

“The Department of Energy calls TRISO the most robust nuclear fuel on Earth,” TRISO-X President Pete Pappano said. “TRISO is a technology that’s been developed and improved over 60 years. Our facility will bring this game-changing fuel to market, beginning with a proprietary spherical fuel pebble for X-energy’s Xe-100 reactor and its utility partner Grant County Public Utility District, in Washington state.” 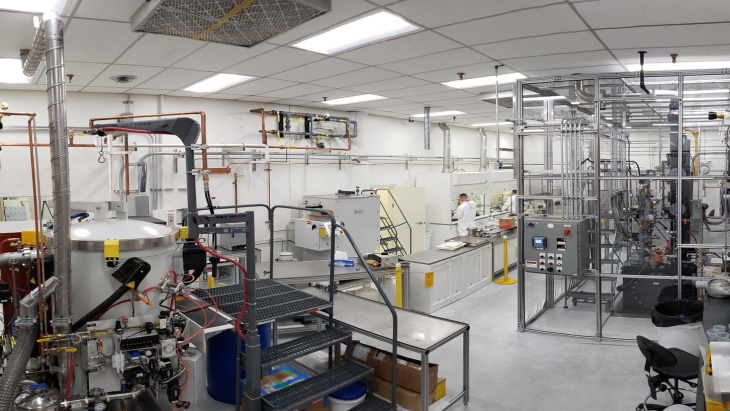 TF3 will also be used to continue to support government funded projects, such as mobile reactors for the military or space nuclear projects, Pappano added. TRISO-X is already operating two facilities at Oak Ridge: the TRISO-X Pilot Facility, located inside Oak Ridge National Laboratory, and the TRISO-X Research and Development Center in the Centrus Technology Manufacturing Center. TF3 is projected to generate more than 400 jobs in the Oak Ridge area and attract some USD300 million of investment.